As Bitcoin (BTC) price pulled back below $12,000, some investors began to worry that another crypto market crash like one that occurred on March 11 would occur.

“People keep worrying about the great sell-off like March, but exchanges don’t have as many idle Bitcoins (waiting to be sold) as that day.”

The Bitcoin exchange reserve metric shows how much BTC is being held at exchanges. When the figure reaches a low it suggests that investors have withdrawn their holdings from the exchange into a more secure and permanent storage.

Data from Chainalysis, also shows that the amount of BTC held for to 52 weeks is on the rise. Furthermore, Glassnode, an on-chain analytics provider, recently observed similar behavior and said that “the decline of Bitcoin exchange balances signals reduced selling pressure.”

At the time of writing, 2.6 million BTC are being held at exchanges, which is lower than the amount held before the March sell-off when the figure sat at 2.9 million BTC.

Miners are not selling

Data from CryptoQuant also revealed that miners are choosing to hold on to their current BTC supply.

This suggests that miners expect higher prices and is a good indication of positive sentiment as miners constitute a significant portion of the Bitcoin selling pressure, they hold some influence over the Bitcoin price.

The Bitcoin hash rate has also been increasing, another bullish sign as more people see the BTC price as being reliable above their price of production, a factor that gives the hash rate and price a strong correlation. 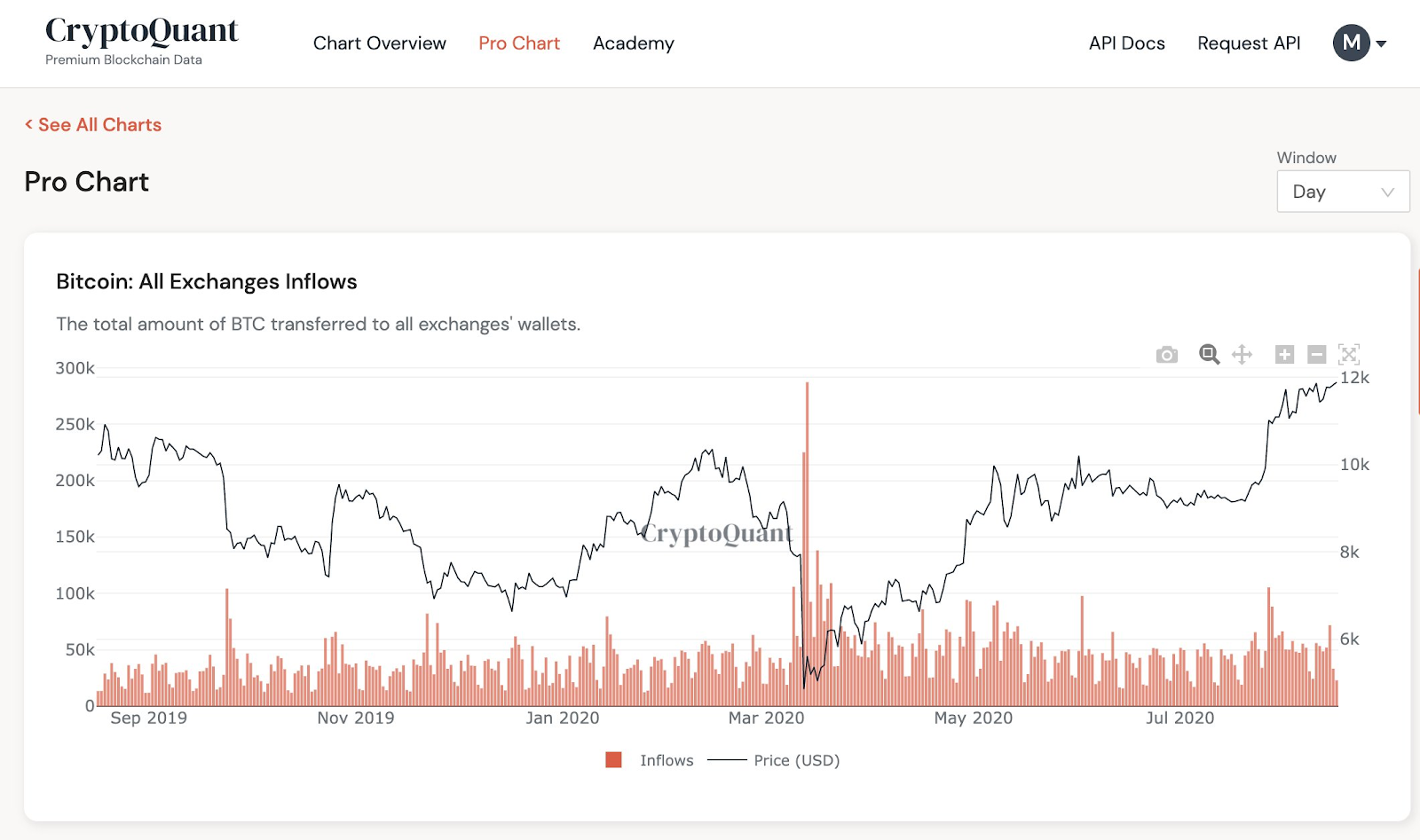 While the number of BTC held by exchanges is at a 2020 low, data from CryptoQuant also shows that this figure may change soon as Bitcoin inflows to exchanges are on the rise.

According to Ki Young Ju increasing amounts of BTC being sent to exchanges is typically a bearish sign.

While increased exchange inflows for Bitcoin are typically bad news, USDT transfers are also on the rise, according to data from Glassnode, having reached their 2020 high on Aug. 17.

As Bitcoin’s Rally Accelerates, Analysts Expect Altcoins to Get Crushed

Bitcoin started the week with a strong breakout to $40,900, but today bulls are trying to hold Bitcoin price above the $40,000 level.

As the price broke from the $31,000 to $39,000 range on June 14, traders speculated that setting a daily higher high and a close above $41,000 would set BTC up for a move to $47,000, but a lack of sustained buy volume and the much-discussed possibility of a death cross between the 50- and 200-day moving average are factors that could be keeping traders cautious.

According to Simon Peters, an analyst at eToro:

“Bitcoin is at its highest level since May, a notable recovery but the crypto asset has yet to convincingly break through – and most importantly, close above – the $41,000 mark.

While sentiment has improved and futures premiums have recovered after nearly entering backwardation last week, analysts are unable to confirm that the bull trend has resumed.

“We’ve seen the price face resistance earlier in the year at this level when it was trading around what was then an all-time high, and I would really need to see a stronger increase to feel optimistic about the price recovering and possibly pushing onto $50,000 and beyond.”

Sentiment has improved but the market is flat

Regarding the lack of follow-through from Bitcoin’s June 14 pump, Cointelegraph analyst Marcel Pechman shared the above chart and said that while the 25% delta skew is no longer signaling that extreme fear exists in the market.

“Arbitrage desks and market markers are currently uncomfortable with Bitcoin’s price as the neutral-to-bearish put options premium is higher. However, the current 7% positive skew is far from the 20% exaggerated fear seen in late May.”

Even though day traders are on the fence about the status of the trend, a number of on-chain metrics, including the Hodler Net Position Change, show that investors still view the recent dip to $30,000 and Bitcoin’s current price at $40,250 as excellent purchasing opportunities.

A Russian State Duma member has blasted the central bank’s tough stance on the cryptocurrency industry for ignoring the growing demand for crypto in the country.

Fedot Tumusov, a member of the “A Just Russia” party representing the Siberian region of Yakutsk, has criticized the Bank of Russia’s approach to regulating the crypto industry following a Tuesday plenary meeting of the State Duma.

In a June 15 Telegram post, Tumusov outlined the growing need to create an ecosystem that allows Russian residents to purchase cryptocurrencies like Bitcoin (BTC) amid increasing demand. The official argued that despite Russia enforcing crypto legislation earlier this year, the Bank of Russia has been negligent, refusing to authorize local banks to offer crypto investment services.

Tumusov said that central bank governor Elvira Nabiullina has been speaking openly about the bank’s reluctance to deal with decentralized cryptocurrencies, focusing on a state-controlled digital ruble instead. “Reluctance or not, this will not change the situation. It is necessary not to struggle with the reality but rather to adjust to it, to respond to the challenges of the time,” Tumusov argued.

The lawmaker noted that many countries around the world offer clear tax laws and policies that allow the industry to develop. He stated that Russia needs methods to deal with crypto that aren’t just prohibitions:

“Short-sightedness can be costly for Russia. Cryptocurrencies are the reality. Either we will accept it, or we will lose.”

Related: Russian Bitcoin critic says he would have bought BTC for 100 rubles

Tumusov’s remarks on crypto come shortly after reports confirmed that major Russian banks like private bank Tinkoff have been unable to offer crypto services due to the Bank of Russia’s tough stance on digital assets. Meanwhile, state-backed commercial banks like Sberbank and VTB largely criticize the industry, claiming that they don’t like Bitcoin because it’s too risky.

While Russian banks are hesitant to dive into digital assets, major crypto companies like Binance have established a presence in the country. According to a June report by crypto intelligence firm Chainalysis, Russia is ranked the fifth-largest country in the world according to its estimated realized Bitcoin gains in 2020, following the United States, China, Japan and the United Kingdom.

Within five years, US hedge funds expect to hold 10.6% of assets in crypto

A new survey of 100 chief financial officers at hedge funds worldwide has indicated that the sector is planning a significant increase in its exposure to crypto assets in the near term.

The survey, conducted by Intertrust, suggests that if the respondents’ forecasts were broadly mirrored across the sector, assets in crypto held by global hedge funds could hit $312 billion. United States-based funds were most bullish about the new asset class, expecting to raise their portfolio exposure to crypto to 10.6% on average within five years.

Their European Union- and United Kingdom-based counterparts gave a slightly more modest figure, although still significant: 6.8% on average. Intertrust’s sample included chief financial officers of funds that each manage an average of $7.2 billion in assets. The CFOs themselves personally expected to have a minimum of 1% of their portfolios in crypto.

High-profile hedge fund managers such as Paul Tudor Jones have been vocal advocates of Bitcoin (BTC) amid concerns about inflationary tendencies in the economy. SkyBridge Capital CEO Anthony Scaramucci takes a similar view of Bitcoin’s potential as a store of value, considering it superior to gold.

Another big name in the sector that is backing cryptocurrency is Alan Howard, co-founder of major asset manager Brevan Howard. Just this week, Howard invested in two digital asset startups following his earlier investment in a digital asset custody services provider created by Nomura in partnership with Ledger and CoinShares. He also owns a 25% stake with One River Digital Asset Management. There have also been reports of Brevan Howard’s plans to directly invest in crypto.

Aside from traditional hedge funds’ increasing confidence in the asset class, there are also a number of attempts to launch new crypto funds in the hope of replicating the successes of Bitwise and Grayscale.